“Better protect the ocean and build fruitful initiatives in terms of research and international policy” was the commitment made by President Emmanuel Macron when announcing the One Planet Summit for the Ocean: the One Ocean Summit. This summit was held from February 9 to 11, 2022 in Brest at the “ateliers des Capucins”, under the French Presidency of the Council of the European Union and with the support of the United Nations. The main commitments that emerged during the summit include the preparation of a treaty on the high seas, which currently escapes any regulation, the fight against plastic pollution, the establishment of new marine protected areas and the mapping of 80% of the seabed by 2030. 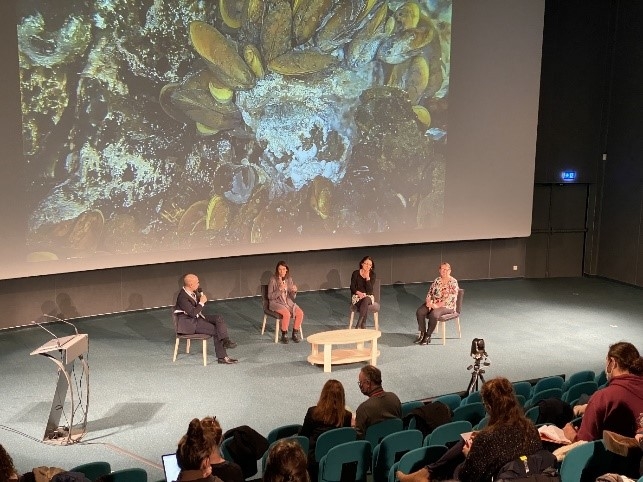 Marjolaine Matabos (LEP/UMR BEEP), second from left) was one of the four guests at the round table "Ocean, science and society" to introduce the citizen science project Deep-Sea Spy. 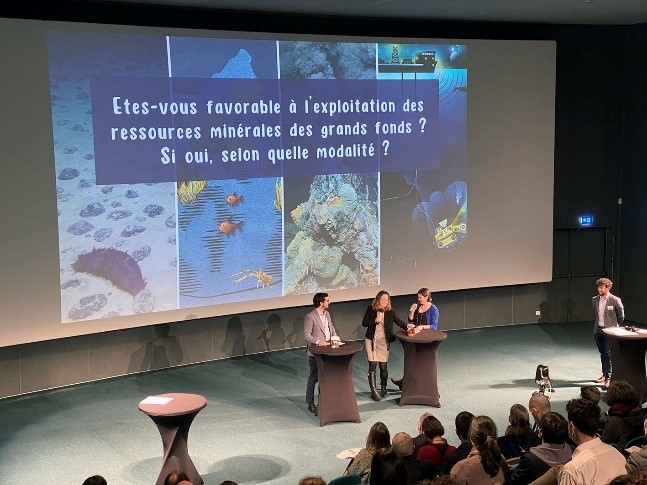 Jozée Sarrazin (LEP/UMR BEEP) introduced the debate on deep seabed mineral resources. The two fake experts then debated the issue and the public voted … mostly against this imminent exploitation

Alongside the main events that gathered more than 400 stakeholders from all over the world, the center for the discovery of the oceans “Océanopolis” welcomed the general public with a dedicated one ocean summit program. The One Ocean Summit pavilion, a genuine 360° deciphering of the themes being addressed at the summit offered open conferences, round tables, expositions, encounters with experts over three days and nights. In this context, iAtlantic scientists Jozée Sarrazin and Marjolaine Matabos (Ifremer) were invited to contribute to round tables and exchanges with the public. Wednesday, February 9, was dedicated to the topics around “Ocean, Science and Society” and biologist M. Matabos participated to the round table "An ocean with and for society, participatory sciences” to present Deep Sea Spy a program that enables citizens to help in the annotations of deep-sea imagery from the Lucky Strike vent field (https://youtu.be/dhNkAIPMAHU). Another event was held Thursday February 10 at Oceanopolis around "The governance of the high seas and the protection of its biodiversity". Biologist J. Sarrazin was invited to briefly introduce deep-sea mineral resources. Her presentation was followed by a debate between two “false” experts (https://youtu.be/1Wz72uyTcGQ) and a vote from the public to the question “Do you want to exploit deep-see mineral ressources?”.